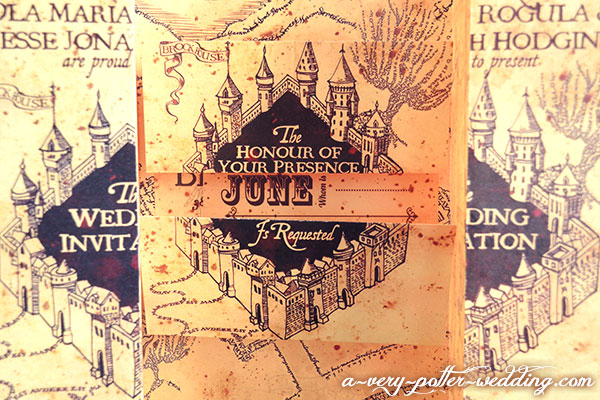 The Marauder’s Map design from the Harry Potter films was a natural choice for our wedding invitations, and not surprisingly, we weren’t the first to use it this way. We were lucky enough to see many beautiful and fun examples already abounding on Pinterest and Google, used both for wedding and Harry Potter themed birthday parties. The idea seems to be growing in popularity by the day, since a few months later, an image search already yields so many more versions than before!

Unlike the Save-The-Date magnets, which were small and could do with a relatively plain envelope, I knew we needed something a bit more fun and ornate for the invitation envelopes. However, the professional printing costs were stacking up, so I wanted to do something at home and save some money. I bought plain, cream colored 8 3/4″ x 5 3/4″ (22.22cm x 14.6cm) envelopes from a stationary store. Since I would be using my home printer, I needed a design that didn’t go riiight to the edge, since that’s the major downfall of cheap printers. I settled on a fantabulous, old British propaganda envelope design. This wasn’t Harry Potter-esque per se, but it did have a great Victorian/vintage vibe to it. This design also featured images from what I’m guessing is the Guiness Book of World Records, such as people of extreme heights. So when you examine the envelope, there’s just enough weirdness there to remind you of wizardly eccentricity!

But the star of the show became the writing, thanks to the amazingly gorgeous Jellyka Delicious Cake font, which I highly recommend! I created a .psd template, then typed out each set of names and addresses, then printed the envelopes on their side. I’m including the envelope .psd template at the bottom of the page, complete with printer settings for the 8.75″ x 5.75″ envelopes.

We sealed these with red wax seals as well, just like we did with the Save The Dates. It just gives that old world vibe that goes so well with the Harry Potter world! 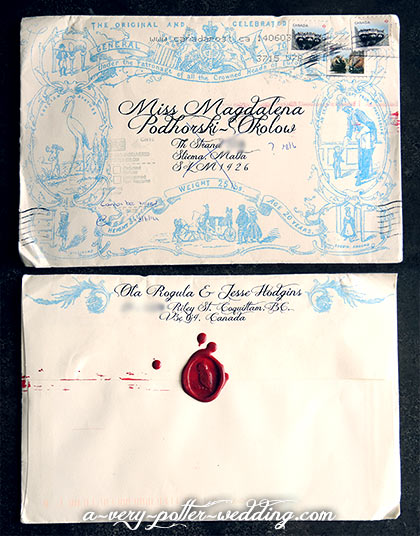 The completed envelope from front and back.

Continuing my desire to stay very traditional (as inspired by Miss Manners), I also created an RSVP envelope design. I included RSVP envelopes in the invitation (pre-stamped, of course!), along with RSVP cards to go inside. More on those later. Something I realized later was that pre-stamping the envelopes only works for invitations being sent within your country! For invitations being sent out to other countries, you would need to include stamps from that country. Stamps from your country won’t work over there. I couldn’t reasonably figure out how to obtain such stamps, so I left international envelopes un-stamped. I figured it’s better that the person see the blank envelope and realize they need a stamp, than accidentally assuming the envelope will send, only to have it returned a week later.

For the RSVP envelope, I modified a simple wreath design which, like the propaganda design, didn’t need to go right to the edge, and could easily be printed at home. If you’re using this template, make sure to change the month and year on the bottom to the date of your wedding! I found the best way to print these little 5 1/2″ x 5 1/2″ envelopes was to feed them in backwards, with the flap open. This way they loaded smoothly, and the top could be inscribed as well. I sent the first few out without a “From:…” spot for people to write their names. This proved to be a huge mistake, as we ended up getting a bunch of RSVP cards that had neither names on them, nor on their envelopes. Once I added the little “From:” slot, everyone else kindly filled in their names and there was no issue =)

The full monty: An invitation package being opened, revealing the invitation and RSVP envelope. 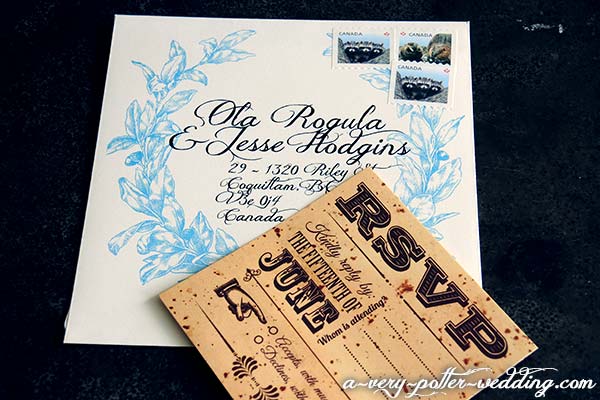 The RSVP card which was meant to be sent back, along with its pre-stamped envelope

And now onto the shining star: the Marauder’s Map Invitation! =D
The current online examples were a bit plain for our liking, and we knew we wanted to include a few more moving parts, to stay truer to the original map. Thusly, our invitation is composed of three separate parts: 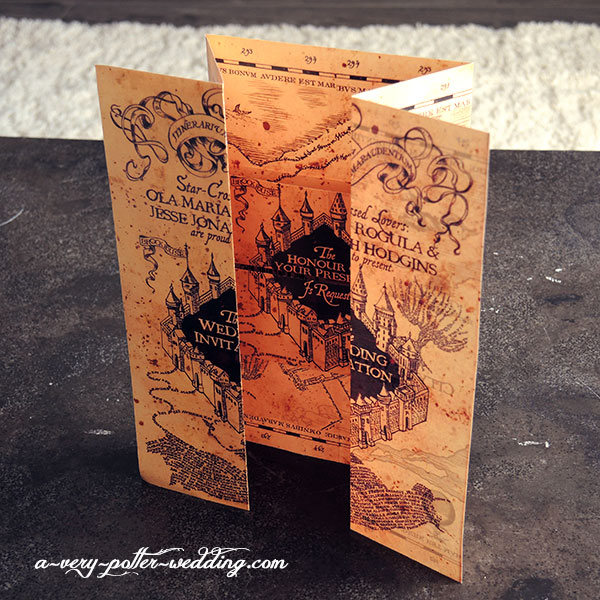 The complete Marauder’s Map inspired wedding invitation, in all of its splendor!

The front looks like the classic Marauder’s Map front. The name of the venue replaces the “Hogwarts” on the flag on the castle drawing. At the top we have the cheeseball opening: “Messers and Mesdames, Star-Crossed Lovers: [name] & [name] are proud to present:” and then it says “The Wedding Invitation” in place of the title. It opens in the center, but first, you may peruse the sides. Under the right-flap, there is a diagram of the city, pointing out the airport, wedding venue and downtown hotel location. I also indicated the rapid transit route that links the airport to the hotel. I doubt anyone will actually use this map though, haha.

Under the left flap, is a guide to telling your guests how to dress to a Harry Potter inspired wedding.

The very back is mostly blank, continuing the parchment paper texture, with the little “Mischief Managed” symbol swirling in elaborate, vintage flag designs. 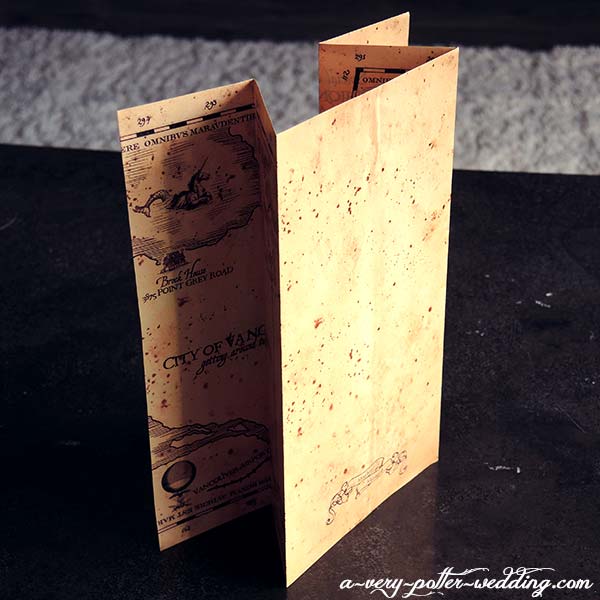 The invitation as viewed from the back. On the left, you can just see the map insert.

The process of unfolding the invitation from the middle goes like this: 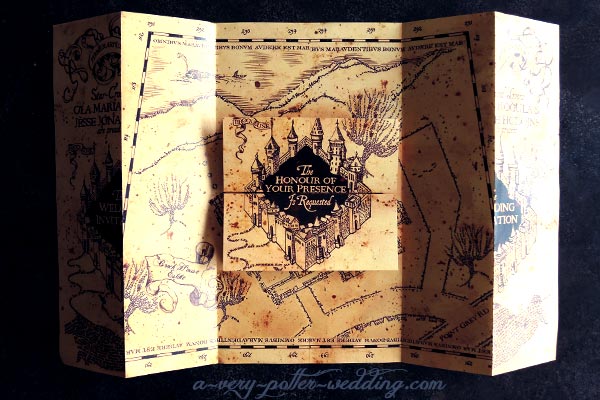 1. The two front flaps are pulled aside, to reveal the “The Honour of Your Presence is Requested” insert. Under that lies a map of the venue which I drew in Photoshop. If you’re curious, lifting or pulling down these middle tabs (as opposed to pulling them open to reveal the middle) reveals a duplication of the map below, so details could be made out, without ripping off this entire insert. 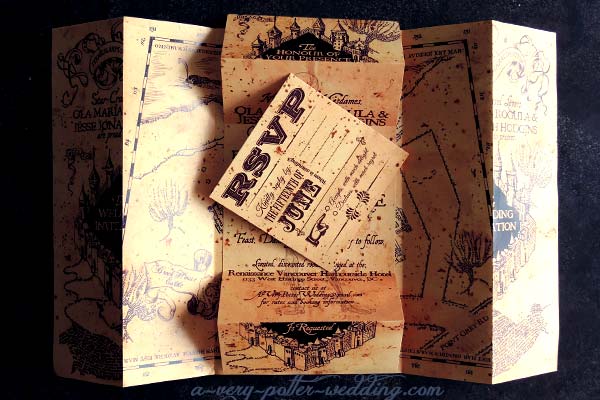 2. The middle insert is pulled apart vertically, revealing the RSVP card nestled inside. 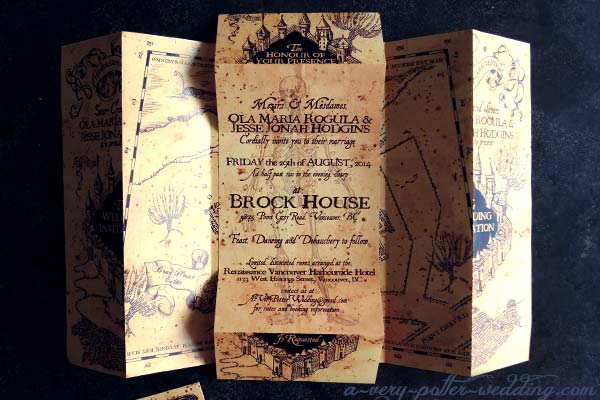 3. Under the card we reveal the actual bulk of the invitation text, detailing the date, time, venue and hotel details.

These templates use the Wizard Hand and Parchment Print fonts, which can be purchased as part of the Wizardings Package over at Crazy Diamond Design. This company re-creates fonts from ancient scriptures, and these were the real fonts used in the Harry Potter Movies!!!  If you can’t afford the package, Times New Roman is a decent substitute for Parchment Print.

Invitation Back and Envelope

Optional JPG only templates (not recommended)

If you are not able to open PSD files, here are the stripped JPG versions (not recommended because they are missing the text placement, transparency, layers, and bleed indicators). Please note there is 1 inch of bleed on the sides of all documents (300 pixels).

1. Print the Invitation Front & Back on the same Legal sized sheet. You will probably want a professional printer for this, as the design goes right to the edge!
2. Fold out the two outer flaps first. Then, fold them into each other, so that the second set of folds aligns with the outer edges. Don’t worry if it’s not perfect.. The whole thing is supposed to have a rustic, vintage appeal ;)
3. Print the Invitation Middle Insert on a regular, Letter sized sheet. Each sheet will produce two inserts. Cut the page vertically down the middle.
4. Fold the insert much like step 2, just vertically: outer folds out, then folding down so the new folds align with outer edges.
5. Glue the insert vertically into the middle of the outer portion.
6. Print the RSVP card on 3.5″x3.5″ cardstock and place it inside the folded middle.
7. Print out the Invitation Envelope (customized for each wedding guest), and RSVP envelope (with your address).
8. Place a return stamps on the RSVP envelope, and sending stamp on the invitation envelope. Place the folded invitation, complete with RSVP card inside, and the RSVP envelope, all into the larger invitation envelope.
Voilà!

Hi, My name is Ola and I got married to my wonderful husband in 2013. We both love Harry Potter so we decided to make it our wedding theme! It went off beautifully and I want to share our hard work with all you lovely people! I also run the dress up games website, Doll Divine ~ 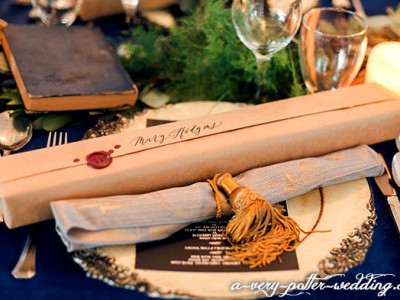 Magical Wand Wedding Favours
It was only appropriate that our wedding favours should be Harry Potter inspired wands! We… 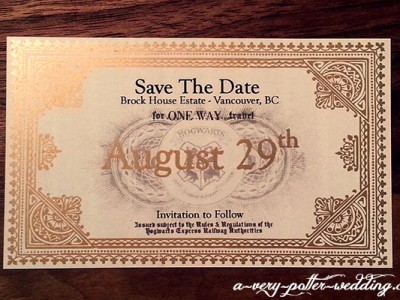 Hogwarts Express Save-The-Date Magnets
Instructions and Free templates below! =D When it came time for our Harry Potter themed…

This article has 87 comments